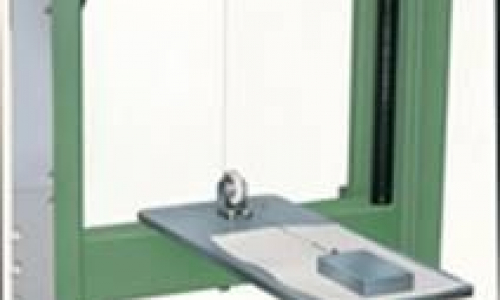 This instrument determines the friction coefficient of the surface of paper and paperboard (including converted paper), using the constant-speed tensioning tensile tester by the horizontal method. Both static and dynamic friction coefficients can be measured.

A specimen is fixed onto the wide smooth metal plate with a tape. Another specimen is applied onto the weight. A low friction pulley is positioned just below the load cell. A thread fixed to the upper chuck is connected, via the pulley, to the weight on the specimen table. As in the ordinary tensile test, the crosshead is lowered to make the weight gradually slide on the specimen. The friction in sliding is detected by the load cell and recorded on the graph. The peak friction at the moment the weight starts to move is static friction, and friction during movement of the weight is dynamic friction.

For using this instrument, it is necessary to work the tensile tester to install mounting pieces.