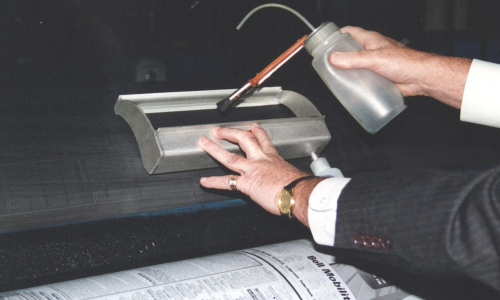 Includes a portable device for collecting lint from an offset blanket [lab or production press] for further analysis. This includes a fractionator to screen the collected lint and calculate an index of linting propensity.

The Lint Tester, developed by Domtar Research, consists of a device for collecting the lint, or other debris, from an offset blanket and a device for screening the lint for analysis.

This device provides a simple and economical means to measure and characterize lint or other offset blanket debris.

In the press room, linting is the result of the linting propensity of the sheet and the printing press conditions.

Lint particles on the blanket will become sufficiently numerous to noticeably degrade the quality of the printed image. This critical property can be easily measured with the Domtar Lint Tester after minimal training of personnel.

Packaged in a sturdy yet small case, the self-contained collection unit has been designed to collect lint from selected areas of an offset press blanket.

The lint collector consists of a tray which is held firmly against the stationary offset blanket area to be sampled.

Using 5% aqueous isopropanol and a brush, the lint and ink are washed off the blanket into the tray and bottled. The "lint" in the bottled samples can be screened to determine the mass fractions retained on each mesh as well as being analyzed by other means.

To simplify the lint screening procedure and to eliminate the sources of variation, a two-stage screening device is provided.

Other mesh sizes are available as options.

The ink pigment and smaller paper-derived material that passed through the 400-mesh screen are ignored.

The material collected on the two removable screens is weighed analytically to give a numerical value for both "large" and "small" lint.